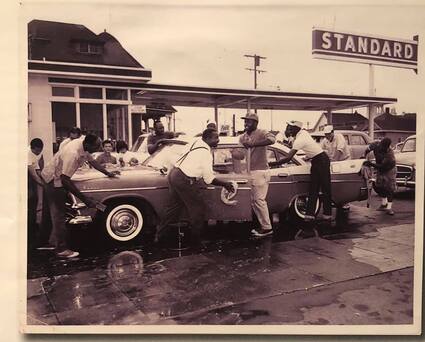 The Seattle branch began to sponsor chapters in other Washington cities that had rapid increases in black population. It also joined with other organizations to lobby in the state capital, Olympia, for a state fair employment practices law, which was enacted in 1949.

The 1950s saw a closer liaison between the NAACP and the black churches. Because of its protests against police brutality and the fact that no black police officers had been promoted, a Mayor's Committee was formed to investigate the situation. The first black police sergeant was appointed in 1964.

The NAACP was instrumental in the passage of a state bill to eliminate the designation of race on drivers' licenses. It protested to the Seattle Park Department regarding discrimination at golf courses. Also on its agenda were segregated housing, employment, and defacto school segregation.

The 1960s and 1970s were rife with movement and change brought on in part by the efforts of the NAACP. In 1961, after a statewide rally in Olympia for an open housing bill, which eventually failed, the association's newsletter suggested that license plates should be made which read "Washington -- State of Segregated Housing and Schools." In 1968, a Seattle City Ordinance for open housing was passed. Washington state finally passed an open housing law in 1969.

The branch assisted African Americans to gain employment in the department stores, Nordstrom, the Bon Marche, and Frederick & Nelson; in grocery stores including Safeway, Albertson's, and Tradewell; and in municipal agencies including the Fire Department.

Seattle Public Schools became the target for change when in 1962 Philip Burton, attorney for the NAACP, threatened the School Board with a suit to force desegregation. This prompted the School Board in 1963 to allow a voluntary transfer program. In March 1966, the NAACP supported a boycott of Seattle's Central Area schools to protest the lack of progress in desegregation. This resulted in the School District establishing a community-based, black controlled approach to education, with a black administrator, Dr. Roland Patterson, hired as assistant superintendent for the Central Area schools. The School Board adopted the Middle School Desegregation Plan on November 11, 1970, in the first phase of a three-phase effort to desegregate the city by 1973.

The plan was never completed. Again in 1976, the NAACP threatened the school district with a law suit. This action prompted the district to adopt the Seattle Plan for mandatory desegregation in 1977.

During the civil rights movement of the 1960s, the branch was kept busy in court defending all the people who had been jailed in the marches and had created disturbances on the University of Washington campus and at other sites in the city while protesting discrimination.

Sources:
University of Washington Libraries, Special Collections, Manuscripts and University Archives, National Association for the Advancement of Colored People Records, 1935-1966, Accession No. 994; Quintard Taylor, The Forging of a Black Community: Seattle's Central District from 1870 through the Civil Rights Movement. (Seattle: University of Washington Press,1994).
Note: This essay was updated on January 27, 2005, and again on February 8, 2009.